The Improv Life: What I Learned About Editing from Rich Sohn

I studied with Rich Sohn online this past year for his Pack Theater Level 2 improv class.

It’s a 4-week session, but you get a lot, and you get a close look at Rich’s improv philosophy, shaped by his years studying, performing, and teaching improv in Chicago, the mecca of our art form.

I liked the class so much I took it twice. And I want to take it a third time. I’m at a point in my journey where Rich’s philosophy and teaching style vibes with me well.

I learned a lot, but I learned about the importance of editing. Scene edits are the invisible fabric of a good show. A good scene depends on how well it’s edited. If you have enough good scenes stringed together, you got yourself a show you can hang your hat on at the end of it.

Pop quiz hot shot: you’re on the sidelines and your team is dying on stage, begging to be edited, but you don’t have an idea for a new scene – what do you do?

You get your teammates the hell out of there, and you trust yourself and your new teammate on stage to make a new scene and figure it out from there. Getting your teammates out of danger is more important than having some hot shot idea for an amazing scene.

A scene that goes on too long is risky. It affects the energy of the overall show. Teammates get insecure, feeling like their sinking in quicksand and being abandoned by their teammates, and the audience is weirded out by uncomfortable scenes that seemingly never end but feel like they should. Good editing solves all these problems and increases the likelihood of good scenes and good shows.

Knowing how to edit is one of the most important skills an improviser could ever develop. This under appreciated ability can be one of the difference makers between an amazing, out-of-this-world show and a “Meh” show that leaves everyone feeling weird afterwards.

Thank you, Rich. Because of you, I know the importance and power of editing (and how to do it). I encourage all of you to go study with Rich Sohn ASAP.

Woooooooo!!! Just did a really fun set with Dingleberries!!!

Well, this week the amazing Allison Smith and I were the guests, and we had a blast!

We just talked in an honestly and real way, and then did some improv. Because we’ve all known each other for a while now, it was easy to play with one another. I mean what else can you ask for? Playing with people you’ve know, really respect and admire, and who make it feel like time flies when you’re in the presence of each other’s company – that’s Improv.

The Year I Grew As A Writer, Producer, & Director

I’ve been telling people that 2019 has been the worst year for me as a performer.

I just felt I was off my game, and that I wasn’t the best me possible, the home run hitter I know I am.

And that’s because I focused all my efforts on writing, producing, and directing.

I gave my attention to others and had less for myself, which I’m fine with because I got to work with some amazing people.

These people astounded me with their passion, their gifts, their willingness to take risks and have fun while failing or succeeding, and always delivering finished projects.

This was definitely a year where I embraced the mantle of leadership and put the good of others in front of my own.

But it’s easy to serve when the people you’re working for are amazing and push you to be a better version of yourself.

We did a lot this year.

Moonshot crushing at the Pack.

The Pachanga crushing it at Second City, Heraldo, the Clubhouse, and Moving Arts.

We actually got the blessing of the X-Men The Animated Series Producers for those shows!

Pachanga Potlucks to fail and have fun.

Table read of Macho Libre, an amazing and necessary and powerful pilot by Marcelina Chavira.

Two-prov with Tiffany Aleman and Diosa.

Got to host the final night of the Orange County Improv Festival.

A lot of amazing conversations with Richard Aaron, my co-producer on the Pachanga.

Hanging out with my sister, Melissa.

Reading for Breath of Fire Latina Theater Ensemble Artistic Director Sara Guerrero on her amazing production of Canto de Anaheim, a play written, produced, and directed by her in collaboration with Gustavo Arellano and the Pacific Symphony.

I got a UCB Diversity Scholarship and started taking classes.

Started teaching improv again after many years by leading the Specs Friday Drop-In.

Teaching my first ever “How To Write A POC Sketch” Class at Second City for LADCF and then San Francisco for Colorized Improv. Thank you for the help Shirley Rivera.

Big Selfie Shows with Brandon, Liam, Sam, and Tee at the Improv Collective.

Performing on the UCB Franklin Stage for the first time ever with the Latinx Comedy Pachanga.

Did my first ever voice over work! A really fun Dora The Explorer cartoon for AOK.

And probably my two proudest accomplishments: shooting The American Dream with Moonshot in the desert (thank you Valerie and Baldev and crew); and directing the Pachanga for LADCF 2020, the best sketch show I’ve directed to this point.

And every project rewarded us with knowledge and experience for the next adventure.

I don’t know what 2020 has in store, but as long as I keep working with amazing people, I know it’s going to be awesome.

Love to all the amazing people in my life. 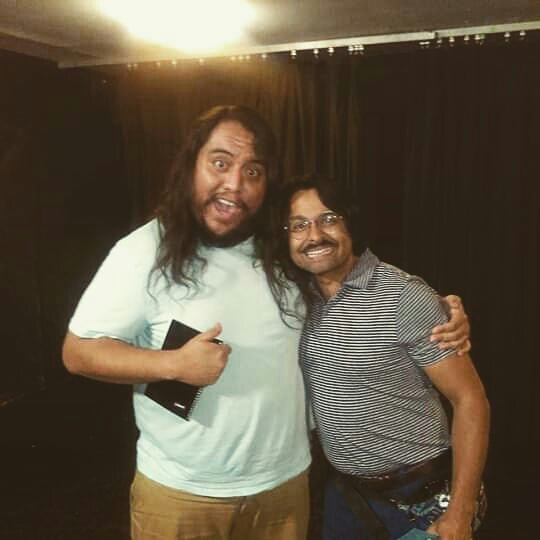 Neal and I at the Pack this past Summer for an amazing Improv class.

If you ever get the chance to study with Neal Dandade, go for it! He is amazing! Here are some reasons why:

1. Neal will teach you how to work in an ensemble and how to adapt your unique individual improv style to fit whatever group you’re working with.

2. Whether taking the class solo or with a friend, you’ll learn to be malleable and responsive to whatever happens in a scene.

3. Neal practices what he preaches too — just check him out every Monday Night at the Pack Theater with Dingleberries, a group of Chicago improvisers who love to fuck with each other.

4. On top of that, his enthusiasm and positivity is down right infectious, and you can’t leave class not liking this man and whatever he’s taught you that day.

5. Seriously, it’s super awesome to be around a guy who is so positive and welcoming.

6. Don’t underestimate the power of these two traits in a teacher.

7. Neal doesn’t judge! His acceptance of students of whatever level they are at makes it extremely welcoming.

8. I don’t feel like I have to please him, or fear disappointing him. He’s chill in the sense that he is there to teach and accept and help you out in this particular step of your journey.

9. I’m not saying I don’t feel this with other teachers. It’s just that with Neal I can let my guard down and be vulnerable.

10. Being vulnerable is when you can be most affected, therefore, be most teachable.

11. Neal will make you feel safe, vulnerable, and from there you will learn.

Level 2 Improv at the Pack Theater last year was a blast because of him, not to mention my amazing classmates, who were a pleasure to work with.

Neal now teaches Improv Level 1 at the Pack Theater, and you should consider studying with him!

Trust me, it’s a choice you won’t regret. Sign up today!

Here is the link! => https://www.packtheater.com/product/improv-i-may-june-2019/ 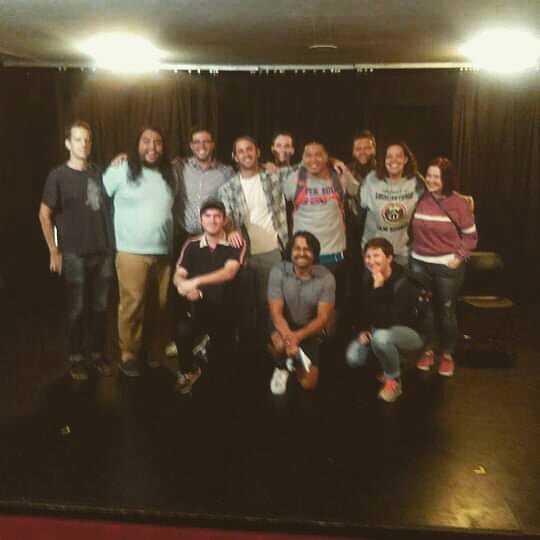 It was a great class! 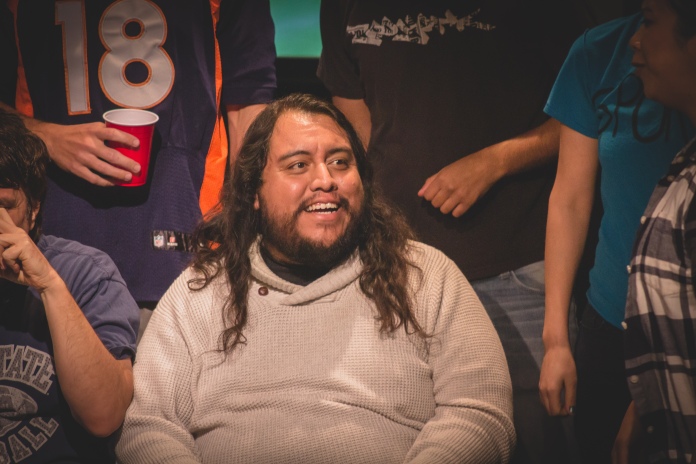 (A pic from my most recent Moonshot show. Pic by Jasper Sams.)

I had the pleasure of teaching the drop-in class for Spectacles Improv Engine in Fullerton, CA on Friday 02/16/19. The following is a summary of what happened, what I learned, and with some shout outs in the end. Enjoy!

Why I Love Emotional Intelligence

Thanks to everyone who came to the drop-in focused on Emotional Intelligence! I’ll try to do a quick debrief here for the people who missed it but were interested in the workshop.

Basically, Emotional Intelligence (EI) is our ability to read another person’s emotional state while being aware of our own, and then responding and adjusting accordingly. There are better definitions out there, and this is one I made up specifically to be used for improv scenes.

EI is something we use every day in how we interact with each other and how we manage the relationships that are important to us. It’s a term you see used a lot in books and articles about corporate leadership and team work (stuff I love to read).

I realized that years of doing improv made me pretty good at reading people’s emotions and reacting to them in a way that wasn’t trying to change them or judge them, but to just accept them as they are and continue to interact from there.

Once I realized that connection — my love for studying EI and all the years of doing improv cultivating this skill in me — I decided that it would be something cool to teach, at least to try to teach!

We did some exercises that were focused on people reading each other’s emotions while having an interaction.

For example, we did one-line dinner scenes where every person could only say one line at a time and could only respond to the thing that was just said. Every line should impact you, stimulate your response, and from that interaction, we could figure out the dynamic of a relationship.

I side coached a lot to get people to not miss any big pieces of information that were dropped suddenly in the scene. I did it not because I was trying to steer the scene in a certain direction. Rather, I did it so that students learn to become aware of not letting any big piece of information go unnoticed — basically to learn to say “That’s interesting,” and explore from there, or call “Bullshit” and push the topic further if you’re watching Dingleberries play (every Monday night at the Pack Theater at 10:00pm).

At the end, I asked each participant what they could tell me about the other interaction based on how they experienced the scene. People came out with some deep awareness of the characters they were playing off of! We then reflected that you can create an interesting scene just by going one line at a time and constantly reading each other! It was a great day for learning!

A lot of this awareness of playing emotional while being aware and in response to my scene partner came from years of Specs training from Matthew Thomas, Samuel Forbes, Joey Shope, and Josh Nicols.

I know I would not be the improviser I am today without the dozens of drop-ins I did with these guys over the years — thank you.

In fact, you can catch the very last Specs drop-in Josh Nicols is teaching this Friday 02/22/19 from 12pm-2pm at Stages Theater. If you haven’t been to a drop-in in a while, you should check it out. If you have never studied with Josh before, this is your chance to see why he’s so great. Just come and experience it for yourself. Thanks for everything, Josh!

Also, there are shows happening at Specs tonight from 9pm to 11pm, and shows next weekend as well with the premier of IFL Season 5! I highly implore you to check it out! Also, I’ll let you all know when I’m teaching a drop-in again! Have a great Saturday!